Cyclists approaching Epsom along Waterloo Road at peak times are blocked by a queue of traffic under the railway bridges that is difficult to get past. As a result, many walk or cycle along the footway on either side. In addition, pedestrians have a narrow footway under the bridge, which is also an unattractive place at which to wait for a bus.

Cyclists approaching Epsom are blocked by a queue of traffic. 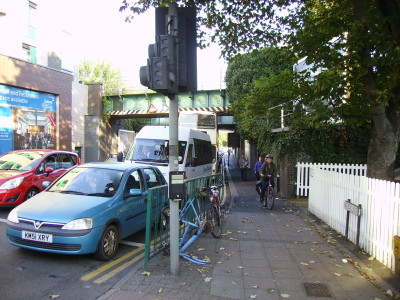 Many cyclists use the footway.

As part of the station redevelopment project, Surrey obtained funding to widen the footway on the west (station) side of the road and designate it for shared use by pedestrians and cyclists. Buses that currently stop under the bridge would instead stop more conveniently outside the station.

The December 2013 meeting of Surrey’s Epsom & Ewell Local Committee decided not to proceed with a scheme at present, but agreed that a task force should reconsider it in the light of the Plan E proposals, which could reduce congestion in Waterloo Road.

The September 2016 meeting of the Local Committee reconsidered this scheme. A number of questions arise:

At its meeting on 25th March 2019, Surrey’s Local Committee finally agreed to the implementation of three options to invest the £50,000 s106 funding in pedestrian, cycle, and public transport improvements in Waterloo Road: 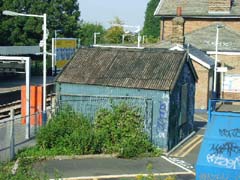 Once upon a time there was a rusty old shed for bikes. Thieves and vandals loved it. 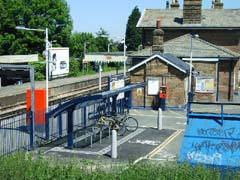 Then a more 21st-century cycle park was installed. 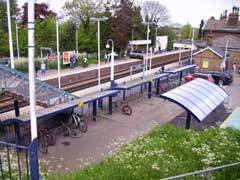 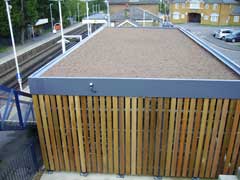 And now a state-of-the art shed has been built, with two-level parking.

Surrey’s engineers first presented proposals for a cycle route between Epsom town centre and Kiln Lane to the Local Committee on 13th September 2010.

In May 2017, Surrey said: “We have some development money that may cover this, but the first call on the developer money is to improve pedestrian facilities at the junction of Kiln Lane  and East Street and tidy up the parking on East Street just to the north of the junction.  If there is any left over after this then the next scheme on the list for these monies is  the East Street cycle path.”

In December 2019, Surrey announced that a design had been completed for a cycle route between Kiln Lane and Epsom High Street. There were three elements:

Surrey officers recommended implementing a route along East Street as part of the ITS programme for 2020-21, subject to sufficient funding being available.

In the spring of 2015, work finally started on a cycle route along Christ Church Road and West Hill. It was a condition of planning consent that the developer of Noble Park should provide this route. 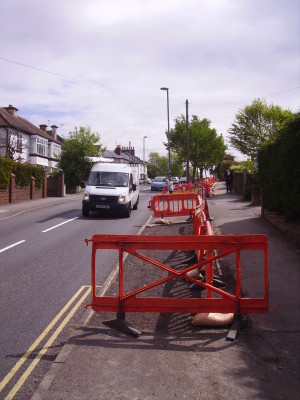 Work in progress on West Hill 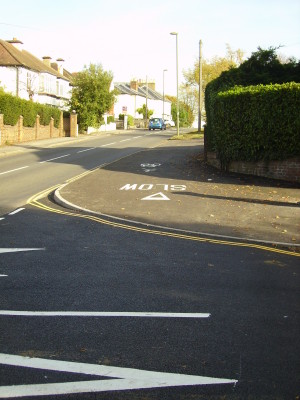 The completed route includes road tables across side roads.

The footway has been widened between Station Approach and Stamford Green to allow shared use by cyclists and pedestrians. To the west of Stamford Green there is a new cycle route behind the church, connecting to the route around Epsom Common.
The section past Stamford Green, where the footway width is constrained by a ditch, is proving problematic.
Since the Noble Park development included parking for 659 cars, we very much hope that this route will tempt residents to leave the car at home and go by bike.
As part of the redevelopment of the St Ebba’s Hospital site, the path connecting Hook Road with Chessington Road has been improved. 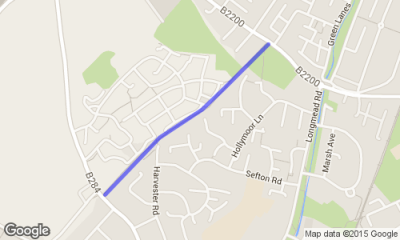 Until its improvement, the path had been unattractive, its surface had deteriorated and it was flanked by two ugly concrete fences: 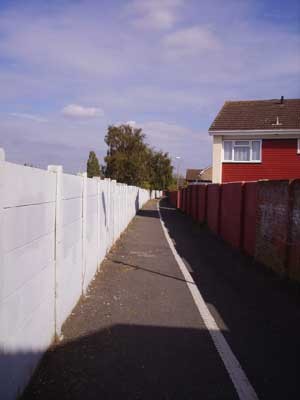 The photo below shows the path after improvement: 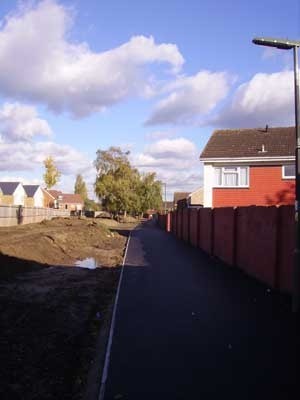 The new path connects with a new toucan crossing of Chessington Road, near Riverholme Drive.

The redevelopment of the station included a significant increase in cycle parking spaces.
Work has now been completed on a mixed use development, comprising new railway station ticket hall facility, 124 residential apartments, 64 bed hotel and ancillary A1 and A3 retail uses, together with 67 car parking spaces, highway and public realm improvements and servicing arrangements.
The development included 200 cycle-parking spaces for rail passengers. The old station had 96 spaces, with a further 28 outside in the street. All the new spaces are at first-floor level, reached from the street via the car park entrance at the west end of the site and reached from the platforms by steps (or a lift) down and up. The Cycling Action Group believed that this arrangement would be inconvenient: it could take at least five minutes to park a bicycle and then reach the platforms. But the increase in capacity is still welcome.
We understand that the developer made contribution to Surrey to pay for the widening of the footway of Station Approach as far as the junction with West Hill. This will allow it to be designated for shared use by pedestrians and cyclists.They also made a contribution for a similar scheme in Waterloo Road, under the railway bridge.

A bridge over the stream that runs into the Hogsmill near Green Lanes, Ewell, has filled the missing link in the Hogsmill path.
There is now a continuous off-road route for cyclists and walkers between the A240 Kingston Road on the boundary with Kingston to Chessington Road in the centre of Ewell Village. Crossing Chessington Road into the grounds of Bourne Hall is expected to form part of plans for Ewell Village in due course.
The bridge was moved from a site in Cobham, where it was surplus to requirements.
Map of the Hogsmill Path (in new window)
The Hogsmill Path was extended again over the summer of 2010, this time from Green Lanes in Ewell towards the culvert under the railway. So there is now a continuous route for cyclists and walkers from the A240 on the boundary with Kingston, across Ruxley Lane, past Ewell Court up to the edge of Ewell Village.
The final section under the railway and up the river to the Horse Pond in Ewell has now been refurbished.
The next stage is to install a bridge across the stream near the end of Green Lanes, Ewell.
Map of the Hogsmill Path (in new window)